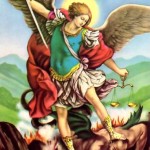 St. Michael the Archangel.. is the patron saint
of police, military and those in service He is a
warrior of God. His name means “Who is like
God?” St. Michael is a powerful protector.He led
the battle against Satan and his followers when
they challenged God.

This morning, when I got up, I pulled a card
from the angel deck and I pulled Michael the
Archangel. I know I have a powerful ally, and
to be on my guard against negativity, and any
evil influence.

PRAYER TO
SAINT MICHAEL
THE ARCHANGEL
St. Michael the Archangel,
defend us in battle.
Be our defense against the wickedness and snares of the Devil.
May God rebuke him, we humbly pray,
and do thou,
O Prince of the heavenly hosts,
by the power of God,
thrust into hell Satan,
and all the evil spirits,
who prowl about the world
seeking the ruin of souls. Amen..

This entry was posted in Archangels. Bookmark the permalink.